France’s first single was at the age of 16 for Prelude Records, the single “Come to Me” began a three-week reign atop the Billboard Hot Dance Club Play on 22 September 1979 and the France Joli album rose to #26. On the Billboard Hot 100 “Come to Me” peaked at #15 a symptom of the increasing disenchantment of pop radio with disco music.

After releasing three albums with decreasing success for Prelude, France made the move to Epic in 1983 with a view to moving outside the disco market.

Joli’s second album released by Epic was “Witch Of Love” (1985) produced by George Duke: prior to the album’s release Joli had performed the Duke-penned track “Party Lights” at the Yamaha Music Festival in 1984 and had won the Grand Prix.

The choice for single was a Jay Ferguson-Deborah Neal composition: the rather quirky “Does He Dance”, which failed at US radio – although it did become a Canadian airplay item – while becoming a moderate club hit boosted by a remix by Shep Pettibone. 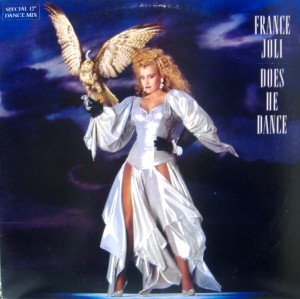 The Horne Section were a short-lived band headed up by Henry Horne, who recruited Roger Garnette on vocals, Sly Smithers on trumpet, Gearald Chavis on trumpet, Harold Watkins on trombone and Rubin Henderson on tenor saxophone. Henry did all the rhythm tracks (live drums and drum machine, all keyboards and synth bass, guitar, percussion, and background vocals).

The band recorded the single “Lady Shine (Shine On)” in 1983 and independently released it on Roe Buck Records, the track was picked up by 4th & Broadway in 1984 who provided the track with a new mix courtesy of  Mark Kamins and Michael Brauer.

Daily signed with A&M Records in 1985, working with Madonna’s frequent collaborators John “Jellybean” Benitez and Stephen Bray. A&M released the R&B/rock single “Say It, Say It as the first single from her debut album “Wild Child”. The song made it to #70 on the Billboard Hot 100, and the #1 spot on the Hot Dance Music/Club Play chart. 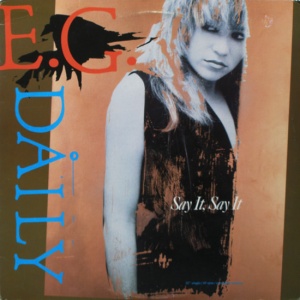 Berlin is an American New Wave/Synthpop band. The group was formed in Los Angeles in 1978 by John Crawford (bass guitar). Bandmembers included Crawford, Terri Nunn (vocals), David Diamond (keyboards), Ric Olsen (guitar), Matt Reid (keyboards) and Rod Learned (drums). Learned left during the first EU tour and was replaced by Rob Brill (drums). The band first gained commercial success in the mid 1980s with singles including “The Metro”, “Sex (I’m A…)”, “No More Words” and the chart-topping single “Take My Breath Away” from the 1986 film Top Gun.

“No More Words” was the first single off the album Love Life. It was also their first Top 40 hit on the Billboard Hot 100, peaking at #23 on May 12 1984. It was one of only two tracks on the album that was produced by Giorgio Moroder and Richie Zito, the other being “Dancing In Berlin”.

The two Moroder produced tracks were remixed and paired together for release on 12″ single in the US and Canada. 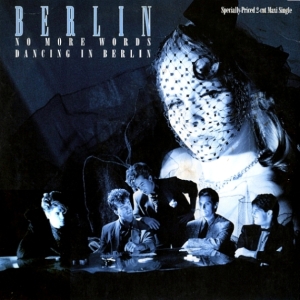 Miles Dewey Davis III (May 26, 1926 – September 28, 1991) was an American jazz musician, trumpeter, bandleader, and composer. Widely considered one of the most influential musicians of the 20th century,Miles Davis was, with his musical groups, at the forefront of several major developments in jazz music, including bebop, cool jazz, hard bop, modal jazz, and jazz fusion.

Having first taken part in the Artists United Against Apartheid recording in 1985, Davis signed with Warner Brothers records and reunited with Marcus Miller. The resulting record, Tutu (1986), would be his first to use modern studio tools—programmed synthesizers, samples and drum loops—to create an entirely new setting for his playing. Ecstatically reviewed on its release, the album would frequently be described as the modern counterpart of Sketches of Spain and won a Grammy in 1987.

The track “Full Nelson” refers to South African politician Nelson Mandela and was remixed for the 12″ single by Marcus Miller and Tommy LiPuma.

The Flirts’ biggest chart success in America was with “You & Me”, which hit number one on the Hot Dance Club Play chart in 1985, helped along by an early Shep Pettibone club mix.

The track was written by Clifton “Jiggs” Chase and Bobby Orlando. Although Bobby’s expertise was in the Hi-NRG dance field, Clifton had amassed a number of songwriting credits on early rap records, including tracks by The Sugarhill Gang (Apache) and Grandmaster Flash & The Furious Five (The Message).

Space Monkey was a British pop group from the mid 1980s, led by singer, songwriter, and guitarist, Paul Goodchild. The group’s sole album was 1985’s On the Beam, issued in the UK by Innervision Records, and in the US by MCA. A previous charting single release, “Can’t Stop Running”, was issued in 1983 on Innervision Records. It peaked at #53 in the UK Singles Chart in October 1983.

Space Monkey was not a “group” per se; Goodchild was the only person to appear on every one of On the Beam’s tracks. Various session musicians were utilized, including Wham’s backup band and members of Bow Wow Wow. Also contributing was keyboard player Adrian Lee, who would later join Mike + the Mechanics.

The third single from the “On The Beam” album was “One More Shot” in 1985, produced by Adrian Lee and remixed by Mark Kamins.

Released in 1982 on Sam Records, “You Can’t Stop” was the only track recorded by David McPherson.

Sam Records was started by Sam Weiss in Long Island City, New York and was one of the many small labels that popped up during the disco explosion of 1976, the label would attract such talent as Darryl Payne, Shep Pettibone, John “Jellybean” Benitez, Mike and Brenda Sutton and many more.

“You Can’t Stop” was written, produced and arranged by Andre Booth who wrote a number of singles for Sam Records in 1981-1982 and played keyboards on late 80’s hits by Rick James and Wally Jump Jr & The Criminal Element.

The track would only appear on CD once and this would be in an edited version only, making this one of the rarer Shep Pettibone mixes and a must have for all Shep fans.

Fonda Rae is an American rhythm and blues singer best known for her club hits like “Over Like a Fat Rat” and “Tuch Me”. She also worked with part-time chart-toppers such as Don Armando and Kid Creole and the Coconuts. Rae also collaborated with more mainstream artists such as Taka Boom, The Fat Boys and Debbie Harry.

The single “Tuch Me” was originally released on KN Records in 1984, written, produced and arranged by Carmichael and Adams and mixed by Bruce Forest, it reached #49 on the UK charts and #70 on the US Billboard R&B charts.

The Cathy Dennis cover version in 1991 would do even better on the charts, going to #5 in the UK, #16 in Australia, #2 on the US Billboard Hot 100 and #1 on the US Hot Dance/Club Play charts. For this cover of Patrick and Greg received the 1992 ASCAP Songwriter of the Year Award.

“This Is Me” was written by Climie Fisher and produced by Steve Lillywhite with backing vocals by Steve’s then-wife Kirsty MacColl.

The 12″ This Is It remix was credited to Mr. Max Hardfilling which was a nom de plume for Mixmaster Phil Harding.

The track was re-released in the UK in 1988 following the success of “Love Changes (Everything)” and “Rise To The Occasion”.