“Rock Your Baby” is a popular song recorded by George McCrae. Written and produced by Harry Wayne Casey and Richard Finch of KC and the Sunshine Band, “Rock Your Baby” was one of the landmark recordings of early disco music. A massive international hit, the song reached number one on the Billboard Hot 100 singles chart in the United States, spending two weeks at the top in July 1974, number one on the R&B singles chart,and repeating the feat on the UK singles chart, spending three weeks at the top of the chart in July 1974. Having sold 11 million copies, it is one of the fewer than forty all-time singles to have sold 10 million (or more) physical copies worldwide.

In 1986, “Rock Your Baby” was re-released in the UK & Europe with a Paul Hardcastle remix.

“Nothing In Common” is a Thompson Twins’ single from 1986 taken from the soundtrack to the movie Nothing In Common. It was written by the duo, Alannah Currie and Tom Bailey. The single peaked at #54 in the U.S. on the Billboard Hot 100 chart.

The single had a promo video to support it featuring Tom Hanks and various clips from the movie.

“Nothing In Common” was remixed by John Morales & Sergio Munzibai for the 12″ single release. 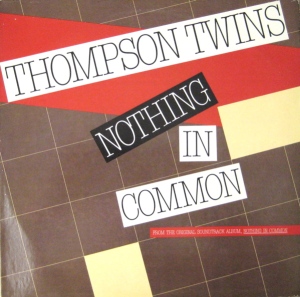 With a smooth sound bringing together elements of funk, R&B, rock, and electric jazz, keyboardist Jeff Lorber helped pioneer a genre of fusion later formatted under such names as NAC and contemporary jazz.

Born in Philadelphia on November 4, 1952, he began playing the piano at the age of four, and as a teen performed with a variety of local R&B bands. Lorber’s infatuation with jazz began during his stay at the Berklee College of Music, and after forming the Jeff Lorber Fusion he issued the group’s self-titled debut in 1977. During the first half of the following decade, the band became one of the most popular jazz acts of the period, touring nonstop and even scoring a Best R&B Instrumental Grammy nomination for the radio hit “Pacific Coast Highway.”

Jeff Lorber reached his commercial peak with the release of the 1986 album Private Passion, an album that has more to do with urban contemporary singing than it does with instrumental pop-jazz. Because it features R&B singers so prominently, Private Passion is a perfect example of what Lorber meant when, in 1998, he complained that the mid-’80s found him becoming “a sideman on my own records.”

The main attraction on Private Passion was the R&B singing of Michael Jeffries and Karyn White, whose memorable performance on the single “Facts of Love” not only put her on the map in the R&B market, but also did a lot to make this album the big seller it was.

The US Promo 12″ single featured remixes by Victor Flores.

White’s self-titled debut album Karyn White was released in 1988. It was produced by L.A. Reid and Babyface and achieved platinum status. Karyn White contained the hit singles “The Way You Love Me”, “Secret Rendezvous” (#6 in the U.S., her biggest hit at the time), “Superwoman” and “Love Saw It” a duet with Babyface. White was nominated in the Best R&B/Urban Contemporary New Artist category for the 1989 Soul Train Music Awards.She was also nominated for two Grammy Awards. She became the first female artist to have their first three solo releases hit #1 on the R&B charts.

“The Way You Love Me” was the first single from R&B singer Karyn White’s self-titled debut album. The song peaked at #7 on the Hot 100 chart, #1 on the Hot Dance Music/Maxi-Singles Sales chart, and at #5 on the dance chart. It also reached #42 on the UK Singles Chart. This song was the first of White’s four top ten hits on the Billboard Hot 100.

Mohandas Dewese (born August 8, 1962), better known as Kool Moe Dee, is an American hip hop MC prominent in the late 1970s through the early 1990s. He was one of the first rappers to earn a Grammy Award and was the first rapper to perform at the Grammys.

In 1985, the Treacherous Three disbanded. After leaving the group, Kool Moe Dee attended the State University of New York at Old Westbury, where he received a degree in communications. In 1986, he went solo, releasing a self-titled album that ranked 83 on Billboard. He co-operated with the young producer Teddy Riley which contributed greatly to the New Jack Swing movement that would gain popularity in the years to follow.

Kool Moe Dee released his second album, How Ya Like Me Now in 1987 which was his most successful album commercially, achieving platinum status.

“Wild Wild West” was released as a single in 1988, produced by Kool Moe Dee & Teddy Riley and remixed by Bryan “Chuck” New.

Kool Moe Dee’s 1988 release deals with the differences in gangs dealing with violence. Released on the Jive label, it was a R&B hit, reaching number four on Billboard’s R&B chart. However, it only reached number sixty-two on the Billboard Hot 100.

In 1985, the band expanded to a sextet, featuring new band members Graham Weir (guitar, keyboards, trombone) and Neil Weir (trumpet, bass guitar), and released Crush, produced by Stephen Hague in Paris and New York. The success of the single “So in Love” in the US Hot 100 also led to some success for the LP which entered the American Top 40, establishing the group in the US as well as making Stephen Hague a sought-after producer.

The same six piece line-up also released The Pacific Age in 1986, but the band began to see their critical and public popularity wane in the UK while they failed to capitalise upon their breakthrough in the US market. The Pacific Age contained the UK No. 11 hit single, “(Forever) Live & Die” and other notable single releases, “Shame” and “We Love You”.

“We Love You” was remixed by Tom Lord-Alge for the 12″ single release. 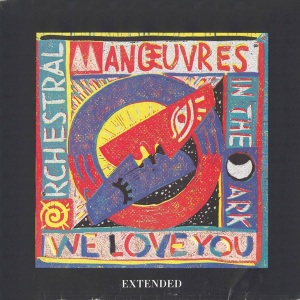 Thompson sang in school and church choirs as a girl, but initially studied for a career in pharmacy. In the mid-1970s, she began working as a backing singer at several recording studios after auditioning for Frank Farian’s Sugar Cane group. Eventually, Thompson embarked on a solo career, with early successes in the shape of Lovers rock singles “I’m So Sorry” (produced by the now London-based Leonard Chin) and “Simply In Love”, which both topped the reggae chart in 1981, the same year seeing the release of her debut album. She won two GLR Reggae Awards in 1982, for Best Female Performer and Best Song (for “Hopelessly In Love”). In 1983, she won further awards, again winning Best Female Performer at the GLR awards. She also recorded duets with Sugar Minott (“Make It With You”) and Trevor Walters (“Love Won’t Let Us Wait”), as well as continuing with regular solo reggae chart hits.

Thompson opted to join the Sheffield-based jazz-funk aggregation Floy Joy in 1984 where she featured on one album and scored two minor hits with the soul ballad “Until You Come Back To Me” (#91 UK pop) and “Operator” (#86 UK pop).

Thompson released three solo singles on Virgin Records during the period 1984 to 1987, the second of these singles “Strangest Love Affair” was written & produced by Steve Harvey and featured an early remix by “Dancing” Danny D with Godwin Logie.

Aurra was an American 1980s soul group, which, at the time of its biggest success was composed of Curt Jones and Starleana Young.

Aurra started off in 1980 as an offshoot of the R&B-funk band Slave, which featured Jones, Young, Charles Carter, and Buddy Hankerson. Aurra initially signed with Dream Records and then Salsoul Records. During the early 1980s, the group found success with hits such as “Are You Single” (#16 R&B) and “Make Up Your Mind,” which was its biggest US hit under this moniker, reaching #6 R&B and #71 pop.Legal issues with a former member over the name Aurra made the duo change its name to Déjà,after which the group had a big hit with “You and Me Tonight,” which reached #2 R&B, #54 pop in the US.A deal with Virgin affiliate 10 Records in the UK resulted in the song reaching #12 on the UK Singles Chart, their best showing on that chart.

The group later cracked the upper reaches of the US Billboard R&B chart hitting #23 with the Teddy Riley-produced hit “Made To Be Together” in 1989.

Albert Joseph Brown III (born June 4, 1968, Boston, Massachusetts) is an American singer, songwriter, and record producer. He grew up in Leonia, New Jersey, and Mount Vernon, New York.During the late 1980s under the stage name Al B. Sure!, he enjoyed a brief run as one of new jack swing’s most popular romantic singers and producers.

As a writer and producer, Brown introduced the multi-platinum group Jodeci and teen R&B performer Tevin Campbell (also one of Quincy Jones’s former protégés), as well as Faith Evans, Dave Hollister, Case, and Usher to the music industry.

“If I’m Not Your Lover” was produced by Teddy Riley and remixed by Al B. Sure! and Roey Shamir, the single was the last of five to be released from the In Effect Mode album and would reach No.2 on the Billboard R&B charts. 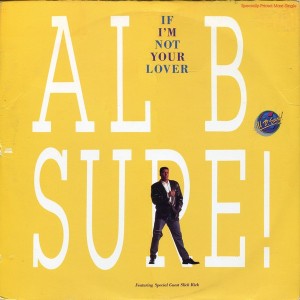 CK was Khan’s first album not to be recorded with Arif Mardin, instead it had with the exception of two tracks Russ Titelman at the helm as producer, with whom she had collaborated on hits like “Ain’t Nobody” (1983), “Eye to Eye” from 1984’s platinum-selling I Feel for You as well as “Tight Fit” from her previous album Destiny. Musically CK combined a variety of genres such as soul, R&B, funk, pop as well as two jazz titles and altogether the set was more laid-back, less hip-hop influenced and production-wise not as complex and synth-driven as I Feel for You and Destiny.

Three singles were released from C.K.: Womack & Womack’s Latino-flavoured “It’s My Party” which reached #5 on Billboard’s R&B Singles chart, “Soul Talkin'” and “Baby Me” which became another Top 10 hit on the R&B chart, peaking at #8. The CK album itself also charted higher than the preceding Destiny, reaching #17 on the R&B Albums chart.

Soul Talkin’ was written by Brenda Russell and the US 12″ single featured the track remixed by Paul Simpson.

The 12″ also added three tracks taken from the successful ‘Life Is A Dance” remix project which was released soon after the CK album.

“I’m Every Woman” was remixed Dancin’ Danny D and “Ain’t Nobody” featured an exclusive to vinyl, Frankie Knuckles remix.