Devo is an American New Wave band formed in 1972 consisting of members from Kent and Akron, Ohio. The classic line-up of the band includes two sets of brothers, the Mothersbaughs (Mark and Bob) and the Casales (Gerald and Bob), along with Alan Myers. The band had a No. 14 Billboard chart hit in 1980 with the single “Whip It”, and has maintained a cult following throughout its existence. Their style over time has shifted between punk, art rock, post-punk, and New Wave. Their music and stage show mingle kitsch science fiction themes, deadpan surrealist humor, and mordantly satirical social commentary. Their often discordant pop songs feature unusual synthetic instrumentation and time signatures that have proven influential on subsequent popular music, particularly New Wave, industrial and alternative rock artists. Devo was also a pioneer of the music video, creating many memorable clips for the Laser Disc format, with “Whip It” getting heavy airplay in the early days of MTV.

“Here To Go” was remixed by Ivan Ivan for the US 12″ Single. 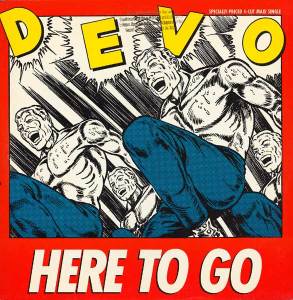