Colonel Abrams (his real name) moved with his family to New York City when he was ten years old due to his father (a construction worker) getting a job there. The family moved to the East Village in Manhattan on East 13 Street. From an early age, he began playing the guitar and piano. He was in several early bands. Among them was Heavy Impact in which he played both guitar and keyboards alongside Joe Webb (guitar), Lemar Washington (guitar), Marston Freeman (bass guitar), Ronald Simmons (drums), Harry Jones (trumpet) and Barbara Mills (saxophone). In the mid-1970s he formed Conservative Manor, 94 East (the band featuring Prince on lead guitar) and the New Jersey band Surprise Package.

Hits in the mid-1980s including “Leave the Message Behind the Door” and “Music Is the Answer” established him as a solo artist, initially in Europe and later in the US. 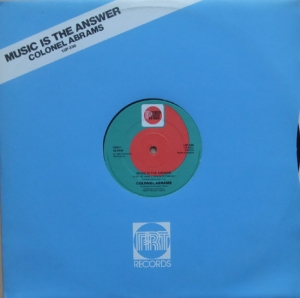 Colonel Abrams is an American house and urban musician, who was born in Detroit, Michigan, and raised in New York City, New York.

Hits in the mid-1980s including “Leave the Message Behind the Door” and “Music Is the Answer” established him as a solo artist, initially in Europe and later in the US.In 1985, he signed to Steven Machat’s label and production company, AMI. Machat, who was working with the New Zealand producer Richard Burgess, hired him to produce Abrams’ self-titled debut album. Machat then arranged for MCA to sign Abrams for worldwide releases. A collaboration with the British producer Richard James Burgess produced the hits “Trapped,” “I’m Not Gonna Let You,” and “Table for Two”.

“I’m Not Gonna Let You” from Colonel Abrams self-titled album, was his third number one on the dance chart and reached the top spot a short three weeks after all cuts from the album, Colonel Abrams had dropped out of the number-one position. “I’m Not Gonna Let You” also reached number seven on the U.S. R&B singles chart and the top 30 on the UK singles chart.

The 12″ remixes are by Timmy Regisford. 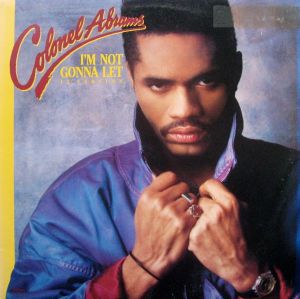