Danceclass were a UK power pop quartet from the North East of England, the band featured Dave Taggart on vocals, Tony Mcananey on bass , Ali Reay on guitar and Trevor Brewis on drums. Danceclass were signed to A&M Records in 1981 and their self-titled album, produced by Mike Chapman (Blondie/The Knack), was recorded and released in 1982.

The bulk of the tracks were recorded in the old Basing Street studios in Notting Hill. later to become ‘Sarm West’ studios.

The Discogs listing for the band is incomplete with the Danceclass album not yet being listed, the album does appear on eBay occasionally but tends to sell for upwards of £ 30.00

The album spawned two singles “Setting Myself On Fire” (7″ only) and “You Talk My Head Off” (7″ and 12″) and nothing has ever been released on CD. This would be a great album for a label like Cherry Red to license and re-release.

If you like your power pop singles, this is one of the best I’ve heard and certainly one of the great finds of the year so far.

You can read more about the band at http://www.danceclassuk.com/fr_danceclass.cfm 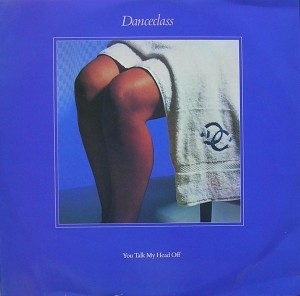