Aurra was an American 1980s soul group, which, at the time of its biggest success was composed of Curt Jones and Starleana Young.

Aurra started off in 1980 as an offshoot of the R&B-funk band Slave, which featured Jones, Young, Charles Carter, and Buddy Hankerson. Aurra initially signed with Dream Records and then Salsoul Records. During the early 1980s, the group found success with hits such as “Are You Single” (#16 R&B) and “Make Up Your Mind,” which was its biggest US hit under this moniker, reaching #6 R&B and #71 pop.Legal issues with a former member over the name Aurra made the duo change its name to Déjà,after which the group had a big hit with “You and Me Tonight,” which reached #2 R&B, #54 pop in the US.A deal with Virgin affiliate 10 Records in the UK resulted in the song reaching #12 on the UK Singles Chart, their best showing on that chart.

The group later cracked the upper reaches of the US Billboard R&B chart hitting #23 with the Teddy Riley-produced hit “Made To Be Together” in 1989. 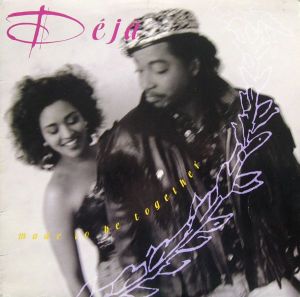 Déjà were a synth soul duo comprised of Starleana Young and Curt Jones, both had previously been members of Slave and the spin-off band Aurra.

Both Slave and Aurra were led by funk legend Steve Washington but in 1985, Starleana and Curt cut the cord with both Salsoul and Steve Washington and signed with Next Plateau (Ten Records/Virgin in Europe), where they almost instantly found success. There, they released the singles “Happy Feeling”and “Like I Like It” (from the 1985 album of the same title). The latter was amazingly enough Aurra’s first record to hit the British charts. The following year, the single release “You And Me Tonight” became a huge hit (U.S. R&B #2/ U.K. #12), which led to a quick re-issue of a partially remixed version of the “Like I Like It” LP, with the addition of the hit single, of course.

Due to legal disagreements with Steve Washington, Aurra then became Déjà and recorded their first album under the new band name for Ten Records/Virgin in 1987. The album “Serious” would include the previous hit “You And Me Tonight” with the 12″ single mixed by House music pioneer Paul Simpson.