Dolly Dots were a popular Dutch girl band in the 1980s. With their style of upbeat dance/pop, they scored many hits throughout Europe. The sextet consisted of Angela Groothuizen, Angéla Kramers, Anita Heilker, Esther Oosterbeek, Patty Zomer and Ria Brieffies.

The Dolly Dots had many hits between 1979 and 1988. They were most successful in the Netherlands, but they also scored hits in the rest of Europe. Their single “Radio” was a big hit in Japan. “P.S.” was a Top 50 Billboard Hot Dance Club Play hit in 1981. They also enjoyed hits in Turkey, Lebanon, Iceland, and toured through Egypt.

At the peak of their success in 1984 the Dolly Dots had their own TV series, Barbie dolls, wallpaper and a number one hit, “Love Me Just a Little Bit More (Totally Hooked On You)”. At the end of the following year, Anita Heilker left the group to have a daughter. She later became the Dutch voice of Donald Duck. The rest of the band continued as a five-piece.

Since the success of the TV series in 1984, there had been plans to record a Hollywood movie. In the summer of 1986 the five remaining Dolly Dots finally went to the US to work with an unfinished script and made a movie called Dutch Treat, which was released later that same year. The movie as well as the soundtrack were a modest success in The Netherlands but were not released in the USA due to poor reviews. The group broke up in 1988. Their last single was an attempt to break into the UK market. The Dolly Dots teamed up with hit producers Stock Aitken Waterman and released the song “What a Night”. It reached number 18 in the Dutch charts, but was not successful in the UK. 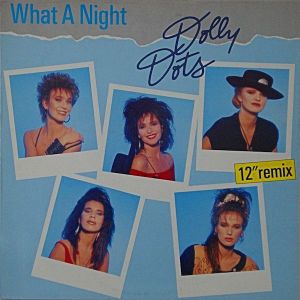