Gwen Guthrie (July 9, 1950 – February 3, 1999) was an American singer-songwriter and pianist, who also sang backing vocals for Aretha Franklin, Billy Joel, Stevie Wonder, Peter Tosh, and Madonna, among others, and who wrote songs made famous by Ben E. King, Angela Bofill and Roberta Flack.

Guthrie is probably best known for her 1986 dance anthem “Ain’t Nothin’ Goin’ on But the Rent”, a self-written and produced track which garnered some controversy for its materialistic lyrics such as, “You’ve got to have a j-o-b if you want to be with me/No romance without finance”. A literal reading suggests a man only require the finances to make a relationship work. However, Guthrie’s lyrics intend to motivate her partner into being responsible for maintaining equality and financial stability.

Her single “Can’t Love You Tonight” boldly addressed AIDS at a time when the disease was a taboo subject. Guthrie was an ally to the gay community, and to people with AIDS long before the masses caught up. Proceeds from the single went to the AIDS Coalition.

“Can’t Love You Tonight” was written and produced by Gwen, co-produced by Sly Dunbar and mixed by Steven “Youthsound” Stanley, 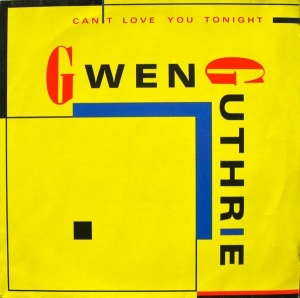 “Ain’t Nothin’ Goin’ on But the Rent” is a hit song recorded by R&B singer Gwen Guthrie. Released as a single in 1986 on Polydor Records, the song became the biggest hit of Guthrie’s career, and the song’s title became a semi-popular catchphrase among many women throughout the late 1980s and early 1990s.

The song was a major hit in the U.S., mostly in dance clubs and on the radio, charting moderately on the US pop chart (reaching #42 on the Billboard Hot 100), but faring better on the R&B chart where it spent one week at #1 and on the Billboard Hot Dance Club Play chart where it spent two weeks at the top. The song was also successful in parts of Europe, reaching #5 on the UK Singles Chart, where it remains a ’80s radio classic. It also reached number-one in New Zealand.

The original 12″ mixes were by Mark S. Berry while this UK 12″ added the rare Dancin’ Danny D “Landlord Mix”. 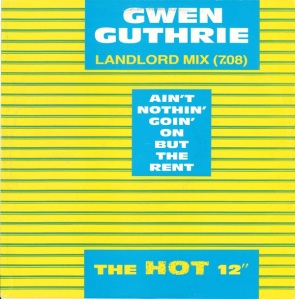