“Whatever I Do (Wherever I Go)” is a Hi-NRG song written and produced by British hitmaking team Stock Aitken & Waterman, which became a hit for singer Hazell Dean in 1984.

Hazell Dean, having had a top 10 hit in early 1984 with “Searchin’ (I Gotta Find a Man)”, was looking for a follow-up single. Through her label Proto Records, she contacted music producers Stock Aitken & Waterman, who had by then worked with fellow Proto records artists Divine and Agents Aren’t Aeroplanes, but were virtually unknown.

The song was originally titled “Dance Your Love Away”, and was given to Dean to record. Dean, however, hated the chorus and Mike Stock and Matt Aitken rewrote it, with the song being re-titled “Whatever I Do (Wherever I Go)”. “Dance Your Love Away” was later rewritten and given to artist Michael Prince, who released it as a single in 1985, with the lyrics changed but maintaining a similar musical structure as “Whatever I Do (Wherever I Go)”.

The single was released in July 1984, and it became an instant smash, peaking at #4 in the UK charts and spending 11 weeks charted.It became the singer’s highest placed single in the UK. It became Stock Aitken & Waterman’s first of many top 10 singles in the UK charts. 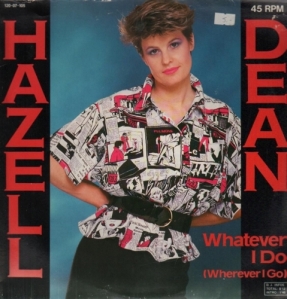