Hey! Elastica were an Edinburgh 4 piece band from the early 80’s signed to Virgin Records.

Working with some big name talent like producers Tony Visconti & Martin Rushent, Hey! Elastica released 4 singles & 1 album between 1982-1984 during a period when Scottish bands such as Orange Juice, Altered Images and Big Country were making major impacts on the UK charts.

In 1982, the band released their debut single “Eat Your Heart Out” which was produced Tony Visconti (David Bowie, T-Rex), in the same year, two members of the band, Giles and Samantha Swanson, appeared on the Paul Haig 12″ single “Blue For You”. 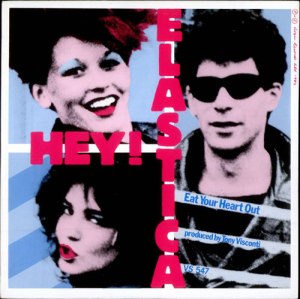