It’s Immaterial were formed by three former members of Yachts – Mancunian John Campbell vocals, Martin Dempsey guitar, and Henry Priestman keyboards – in addition to Paul Barlow, drums. By 1984, the band had been reduced to a duo – Campbell and Jarvis Whitehead, guitar and keyboards, who joined in 1982.

On 11 November 1981, around the time of the release of the band’s third single, It’s Immaterial recorded the first of four sessions for John Peel at BBC Radio 1.  The track listing was “A Gigantic Raft (in the Philippines)”, “Imitate The Worm”, “White Man’s Hut”, and “Rake”.  “A Gigantic Raft” has since been featured on the soundtrack of Jonathan Demme’s 2004 remake of The Manchurian Candidate.

In April 1985, the band recorded their fourth and final John Peel session (track listing: “Rope”, “Hang On Sleepy Town”, “Space”, and “Festival Time”). In the same month, the band’s Fish Waltz E.P. reached number 30 in the UK Indie Chart. Within a year of Fish Waltz, It’s Immaterial had a hit single, “Driving Away From Home (Jim’s Tune)” which has since been featured widely on television advertisements and 1980s based compilation albums.

“Driving Away From Home (Jim’s Tune)” reached No.18 on the UK charts and was followed up with “Ed’s Funky Diner” which managed to reach No.65. 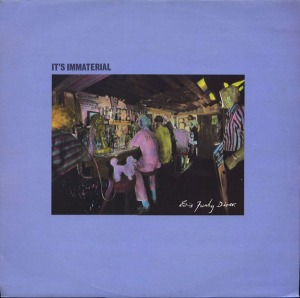