James Dixon Swan (born 28 April 1956), better known as Jimmy Barnes, is a Scottish-born Australian rock singer-songwriter. His father, Jim Swan, was a prizefighter and his older brother John Swan also works as a rock singer. It was actually John who had encouraged and taught Jim how to sing as he wasn’t really interested at the time. His career both as a solo performer and as the lead vocalist with the rock band Cold Chisel has made him one of the most popular and best-selling Australian music artists of all time.

In 1987, Jimmy Barnes released the album “Freight Train Heart”, which featured contributions from a range of US musicians including Huey Lewis, Journey members Randy Jackson and Neal Schon and former Babys and Rod Stewart drummer Tony Brock, who would later accompany Barnes on tour. The recording process was deeply problematic however, as Barnes fought with producer Jonathan Cain over artistic control and Geffen Records wanted to feature a solo by Robert Cray in the track “Too Much Ain’t Enough Love” in place of the one laid down by Schon. In the end, Barnes claimed the masters and returned to Sydney to rework the recording with English producer Mike Stone. Most of the songs were remixed, with parts added by Peter Kekell, Rick Brewster from The Angels, and Johnny Diesel, the 20-year-old guitarist and frontman of Perth band Johnny Diesel and the Injectors, who had just begun to make a name for themselves. Jon Farriss from INXS and ex-Angels bassist Chris Bailey also played on the album.

The album spent 5 weeks at the top of the Australian Album charts in Dec 1987 / Jan 1988. Most of the tracks were written by Barnes and producer Jonathan Cain, however “Waitin’ for the Heartache” was co-written by Barnes and Desmond Child and for the single release was remixed by Desmond Child. “Seven Days” was a Ron Wood track originally written for him by Bob Dylan. This was the last song recorded for the album, and features INXS drummer Jon Farriss, bassist Chris Bailey and Rick Brewster from The Angels. “Seven Days” was remixed by Bob Clearmountain for the “American Mix”. 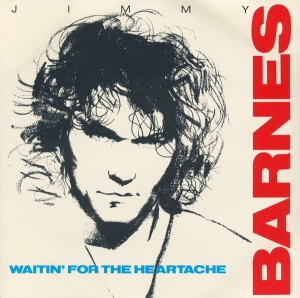