Level 42 are an English pop rock and jazz-funk band who had a number of worldwide and UK hits during the 1980s and 1990s.

The band gained fame for their high-calibre musicianship—in particular that of Mark King, whose percussive slap-bass guitar technique provided the driving groove of many of the band’s hits. The band are also known for the combination of King’s lead vocals and keyboard player Mike Lindup’s falsetto backing vocals.

In 1982 Level 42 released their third album The Pursuit of Accidents. This was a further development of the Level 42 formula, maintaining their instrumental jazz-funk skills and styling but also experimenting further with pop songs. Both of the singles from the album — “Weave Your Spell” and “The Chinese Way” — charted. The latter in particular rose high in the charts and gained the band a much wider audience than before, ensuring that the parent album went on to become a huge seller.

For the U.S. 12″ release of “The Chinese Way”, the single was remixed by John Luongo. 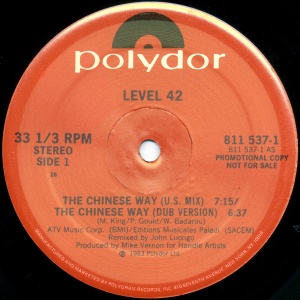