Loverboy is a Canadian rock group formed in 1979 in Calgary, Alberta. Throughout the 1980s, the band accumulated numerous hit songs in Canada and the United States, earning four multi-platinum albums and selling millions of records. After being rejected by many American record labels, they signed with Columbia/CBS Records Canada and began recording their first album March 20, 1980.

It’s been reported their name was chosen while browsing through a magazine, where they saw a Cover Girl ad. Cover Girl became Cover Boy, and then became Loverboy. The group, with Jim Clench (ex-April Wine and BTO) on bass, made its live debut opening for Kiss at Pacific Coliseum in Vancouver, B.C. on November 19, 1979.

“Passion Pit”, from the band’s third album “Keep It Up” , was released on US Promo 12″ single only and remixed by Francois Kevorkian. 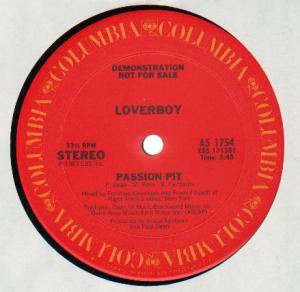