From late in 1986 to early 1987, Mental As Anything were the opening act on the multi-group Australian Made concert tour where they were joined by former Dynamic Hepnotics keyboardist Mike Gubb.The tour started with claims of mateship and cooperation; however arguments ensued between various band managers over the proposed concert series film. At the Sydney concert, Peter Trotter, playing saxophone for Mental As Anything, collapsed on stage and died a week later. The tour ended in acrimony with two managers, Chris Murphy (for INXS) and Jeremy Fabinyi (for Mental As Anything), arguing backstage in Sydney and coming to blows. A film of the tour, Australian Made: The Movie, directed by Richard Lowenstein, was released in July 1987,but contained no footage of Mental As Anything performing. They followed the Australian Made tour by extensive touring of Europe and the UK on the back of the success of “Live it Up” and to promote their album of that year Mouth To Mouth, again produced by Richard Gottehrer. 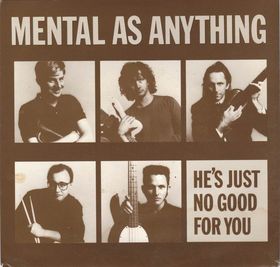 In December 1984, Mental As Anything released the blackly humorous Christmas release, “Apocalypso (Wiping the Smile off Santa’s Face)”, written by Martin Plaza and Reg Mombassa, it was one of the first Australian recordings to be remixed as a 12″ ‘disco’ version. The innovative stop-motion video by B Sharp Productions to promote “Apocalypso” later shared the “Best Promotional Video” award—with INXS’ “Burn for You” by Richard Lowenstein—at the 1984 Countdown Awards held in 1985.

The first single from the album, “You’re So Strong” (March 1985), written by Andrew “Greedy” Smith, peaked at #11 in Australia and also  charted in the top 30 of the US Billboard Hot Dance Club Songs chart.

For the US 12″ single release, “You’re So Strong” was remixed by Andy Wallace who received major success in 1992 when he mixed Nirvana’s “Nevermind” album.

The band performed three songs in the 1985 Oz for Africa concert (part of the global Live Aid program) – “Live it Up”, “If You Leave Me, Can I Come Too? ” and “You’re So Strong”. It was broadcast both in Australia and on MTV in the US.

Mental As Anything (or Mentals to fans) is an Australian New Wave–rock music band formed at an art school in Sydney in 1976.Its most popular line-up was Martin Plaza (real name Martin Murphy) on vocals and guitar; Reg Mombassa (real name Chris O’Doherty) on lead guitar and vocals; his brother Peter “Yoga Dog” O’Doherty on bass guitar and vocals; Wayne “Bird” Delisle (real name David Twohill) on drums; and Andrew “Greedy” Smith on vocals, keyboards and harmonica.

The fourth single from the band’s fifth studio album “Fundamental” was the Martin Plaza penned “Big Wheel”. The album was produced by American record producer legend Richard Gottehrer and did result in the band’s biggest international success “Live It Up” after the track was used in the film “Crocodile Dundee”.