“My One Temptation” was released by 4th & Broadway and Island Records in 1988 and became Mica Paris’ biggest hit, reaching the top ten of the UK Singles Chart and US Hot Adult Contemporary Tracks chart. It was also a top twenty hit on the US Hot R&B/Hip-Hop Songs (then titled “Hot Black Singles”) and Irish Singles charts.

The US remixes were supplied by Bruce Forrest and Frank Heller. 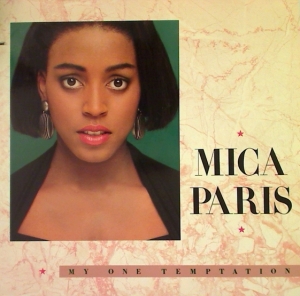 Paris’ roots are in soul and gospel music. She grew up singing in her grandparents’ church and by her mid teens was making regular appearances with ‘The Spirit of Watts’ gospel choir (with whom she featured on the 1985 EP Gospel Joy).She abbreviated her forename to Micha, before adopting a “phonetic version”. At the age of seventeen, she got her first break as a backing vocalist with the UK band Hollywood Beyond. Paris appeared on their album, If (1985).

In 1988, she released her debut, platinum-selling album So Good with 4th & Broadway when she was 19 years old. “My One Temptation” was the lead single. This led to a collaboration with American soul singer Will Downing on a cover version of a classic “Where Is the Love”, made famous by Donny Hathaway and Roberta Flack in the early 1970s.

“Breathe Life into Me” was released as the third single and became her third, consecutive top-thirty hit in the UK and in the US the 12″ single featured remixes by David Morales and Frankie Knuckles.