“Each Time You Break My Heart” is a 1986 song recorded by singer Nick Kamen featuring Madonna and Siedah Garrett on backing vocals. It was his debut single from his album Nick Kamen, released in 1987. The song achieved success in many European countries, including Ireland, Italy, UK, Swiss, and in the U.S. it was a top five hit on the dance charts.

Written and produced by Madonna and Stephen Bray, it also cracked both the U.S. dance chart (remix by Shep Pettibone) and the Top 50 in Canada. Madonna had originally written and recorded the song for her “True Blue” album, but it did not make the cut. Her original version remains unreleased officially, but has leaked onto the internet. It is almost identical in melody and structure to Kamen’s version.

The US 12″ single release included a Dub Mix and Radio Mix, both by Shep Pettibone, which were not included on any other official releases.

All mixes were edited by The Latin Rascals.

A recent post featured the Arthur Baker mixes of “Nobody Else” by Nick Kamen from the UK 12″ single which included one of Arthur’s legendary dub mixes, now we have the US 12″ single which added the John “Jellybean” Benitez remixes.

Despite these excellent mixes from both Jellybean and Arthur Baker and songwriting credits by Brenda Russell and Jeff Hull, the single would only reach #47 on the UK charts.

He is most remembered, in the UK, for his 1985 beefcake performance in Levi’s “Launderette” television commercial,where he strips down in order to stone-wash his blue jeans in a 1950s style public laundromat while he waits clad only in his boxer shorts, which was one of a series of Bartle Bogle Hegarty advertisements that dramatically increased the popularity of Levi 501s. It was selected for, and came fourth in, The 100 Greatest TV Ads in 2000.

His first single was the 1986 UK number five hit “Each Time You Break My Heart” from his eponymous début album.Written and produced by Madonna and Stephen Bray, it also cracked both the U.S. dance chart (remix by Shep Pettibone) and the Top 50 in Canada. Madonna also sang the backing vocals.

“Each Time You Break My Heart” was followed with the singles “Loving You Is Sweeter Than Ever” and “Nobody Else” which did not fare as well in the charts as the first two releases.

Interestingly, for the 12″ single release of “Nobody Else”, the Dub Mix was promoted to the A side with the Dance Mix on the B side. Edited by Junior Vasquez and Remixed by Arthur Baker. 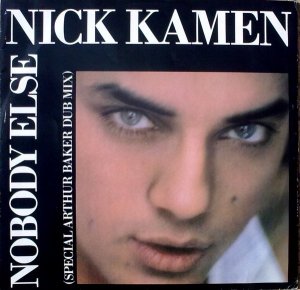