Pure Energy was an American disco and post-disco music group best known for their various club hits such as “You’ve Got the Power”, “Breakaway” and “Love Game”. The band comprised Curtis Hudson, Lisa Stevens, Raymond Hudson, and Wade Hudson.

Two members of the group, Curtis Hudson and Lisa Stevens, also wrote a song titled “Holiday”, covered by Madonna in 1983.

The group first signed to Prism Records in 1980 to record a disco and R&B- influenced eponymous album which spawned two singles, namely “Party On” in 1980 and “You’ve Got the Power” in 1982.

In 1982, the group released “Breakaway” and “Too Hot” which entered the Billboard Dance charts, both written by Raymond Hudson, Curtis Hudson, and Lisa Stevens.

In 1983, they recorded two Italo disco-influenced boogie songs, “Spaced Out” and “Love Game”. Although not charted, Billboard magazine listed “Spaced Out” among its Top Single Picks in the “recommended” section.  The second song, however, peaked at number #30 on the Billboard Dance chart.  “Love Game” was remixed by Morales and Munzibai. 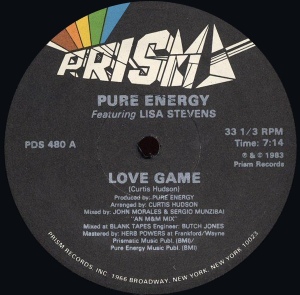