Regina Richards (born April 22, 1954), better known by her stage name Regina, is an American dance music singer born in Brooklyn, New York. She is best known for her hit “Baby Love,” which reached Number 10 on the Billboard Hot 100 in 1986. It peaked in the UK Singles Chart at #50 the same year.

Regina graduated from Marymount Manhattan College in 1975 with a degree in theatre. She began her musical career as part of the New York punk and new-wave scenes. Her first single “Tyger” was released by A&M Records in 1980. She then released an album as Regina Richards and Red Hot on A&M, followed by a solo single, “Deep Dreaming,” for that label.

Initially, Regina only wished to pursue success in the mainstream style as a songwriter, with the idea that her work as a performer would remain in an alternative music vein. Regina co-wrote “Baby Love” with frequent Madonna collaborator Stephen Bray; Regina wanted another person to sing the song, however her record label, Atlantic Records, told Regina to sing the song herself. 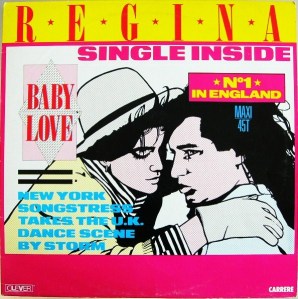