“Holly Rock” appeared on the soundtrack of the 1985 film Krush Groove, with Sheila E. also performing the song in the film. It is a high-energy rap number with Sheila E. rapping throughout most of the song. The song did not chart, but it became a fan favorite.

The US Promo 12″ featured an extended version of the track which also appeared on the only other 12″ release in Germany. 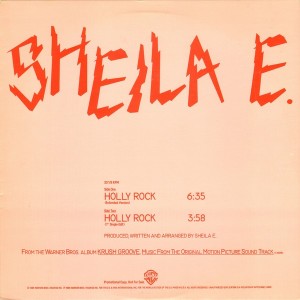