For the album, SPK’s Graeme Revell and Sinan Leong were joined by Jeff Bartolomei on keyboards, Mary Bradfield-Taylor on vocals, Graham Jesse on saxophone, James Kelly on guitar, Sam McNally on keyboards and Phil Scorgie on bass guitar.Australian rock music historian, Ian McFarlane saw the album as “mixed mainstream disco-pop and sweet vocals with electronic experimentation (sort of like Blondie meets Kraftwerk)”.While Allmusic’s John Bush felt it was “another leap towards dance-rock and away from the group’s industrial past”.

There is a clear dichotomy between early industrial SPK (1978–83) and the more commercial music later favoured by Revell. Later releases, such as Machine Age Voodoo (1984), were more synthpop-oriented than industrial. Still later, the group moved into electronic orchestral work, with the release of Zamia Lehmanni: Songs of Byzantine Flowers (1986). This would ultimately lead to Revell’s long and and successful career as a film score composer. The SPK single “In Flagrante Delicto” was the basis for his first film score, for Dead Calm, which won him an Australian Film Industry award. 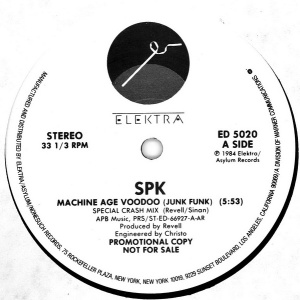 SPK were an Australian industrial music and noise music group formed in 1978. They were fronted by mainstay member, Graeme Revell on keyboards and percussion. In 1980 the group travelled to the United Kingdom where they issued their debut album, Information Overload Unit. In 1983 Sinan Leong joined on lead vocals. The group disbanded in 1988, two years later Revell and Leong relocated to the United States, where Revell has worked as a Hollywood film score composer. According to Australian rock music historian, Ian McFarlane, SPK were “at the forefront of the local post-punk, electronic/experimental movement of the late 1970s … [their] music progressed from discordant, industrial-strength metal noise to sophisticated and restrained dance-rock with strange attributes”.

In 1984, SPK released the album “Machine Age Voodoo” , the album was less experimental than their earlier work and contained some of the best synth-pop to come out of Australia. The album was finally released on CD by Wounded Bird in 2008 but unfortunately the 12″ mixes of the singles “Metal Dance” and “Junk Funk” were not included. 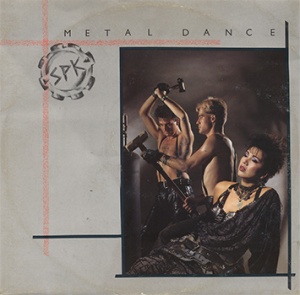