Alexander Robotnick (a.k.a. Maurizio Dami) is an Italian electronic musician. He made his debut on the Italian music scene as the founding member of Avida, a dance-cabaret band featuring Daniele Trambusti and Stefano Fuochi.

In 1983 he attained international popularity with his track “Problèmes D’Amour”, published first by the Italian label Materiali Sonori and then by Sire-WEA. “Problèmes D’Amour” went on to become a “cult track” of dance music. In 1984 he joined “Giovanotti Mondani Meccanici” a multimedia-oriented group and composed soundtracks for theatre works, videos and video-installations. He also composed soundtracks for films and theatre works by Italian directors such as Alessandro Benvenuti, Antonio Climati, Marco Mattolini, and Marco Risi.

The 1985 US Promo of “Problèmes D’Amour” was edited by Bruce Forest. 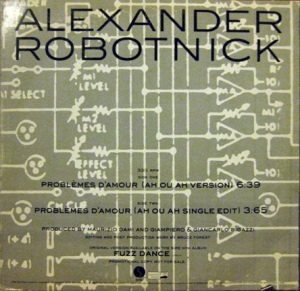 “White Lines (Don’t Don’t Do It)” is a hip-hop-funk song by Melle Mel, released as a 12″ in 1983 on Sugar Hill Records. The song, which warns against the dangers of cocaine, addiction, and drug smuggling, is one of Melle Mel’s signature tracks. The bassline is sampled from a performance of the Sugar Hill house band (featuring bassist Doug Wimbish) covering “Cavern”, a single by post-punk band Liquid Liquid.

When originally released on Sugarhill, the record was credited to Grandmaster Flash & Melle Mel (some international issues also carried the same credit). This was done to mislead the general public into believing that Grandmaster Flash participated on the record, when in fact he played no part and had already left the Sugar Hill Records label the previous year.

“White Lines” peaked at No. 47 on the Billboard Hot R&B/Hip-Hop Singles & Tracks chart in 1983. The song fared better in the United Kingdom, reaching number 7 on the UK Singles Chart in July 1984, spending 17 consecutive weeks in the top 40. It was the 13th best-selling single of 1984 in the UK, selling more than several number one hits that year.

The song was co-written by Melle Mel and Sylvia Robinson. Originally, it was intended to be an ironic celebration of a cocaine-fueled party lifestyle, but it was abridged with the “don’t do it” message as an anti-cocaine song as a concession to commercial considerations. 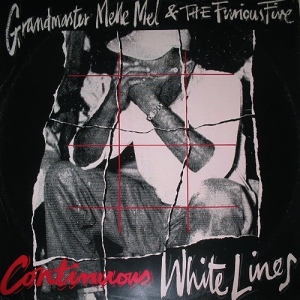 John Benitez (born November 7, 1957), also known as Jellybean, is an American drummer, guitarist, songwriter, DJ, remixer and music producer of Puerto Rican descent. He has produced and remixed artists such as Madonna, Whitney Houston, Michael Jackson, and the Pointer Sisters.

Benitez scored two pop hits in the U.S. in the 1980s from music produced and released under the Jellybean moniker: “Sidewalk Talk” (US #18), written by Madonna and featuring Catherine Buchanan; and “Who Found Who” (US #16), featuring Elisa Fiorillo. He has, however, placed nine songs in the Top Ten of the U.S. Hot Dance Music/Club Play chart, including three number ones. Other vocalists that have performed on a Jellybean release include Adele Bertei, Richard Darbyshire and Niki Haris. His 1984 cover of Babe Ruth’s “The Mexican” (for which he recruited the vocals of its original singer, Janita Haan) is regarded as a pivotal moment in the electro-hip hop underground scene, and was his first number-one single on the Hot Dance Music/Club.Play chart.

Janice Christie fronted female soul funk vocal trio “Wild Sugar” who released the single “Messin’ Around / Bring It Here” in 1981. Wild Sugar were Fatback’s backup singers and dancers and collaborated with the band throughout the 1980’s. Bill Curtis & Gerry Thomas of Fatback produced and co-wrote the track “Bring It Here” which was later sampled in the Beastie Boys hit “Brass Monkey.”

The single “Heat Stroke” was written and produced by Peter Lord (The Family Stand) and the 12″ single featured remixes by Tony Humphries and Larry Levan.

Phyllis Nelson (October 3, 1950 – January 12, 1998) was an American singer, most famous for her UK chart-topping recording, “Move Closer”. Her son is the singer and record producer, Marc Nelson.

Nelson was born in Indiana. She worked and recorded for several years from the late 1970s to the mid-1980s without achieving much success. Her records were usually dance tracks, and she also recorded numerous records during the disco era.

In 1984, she recorded a self-written ballad entitled “Move Closer”. It was a complete departure from the type of music she had been recording. While “Move Closer” failed to find an audience in her home country, it reached number one on the UK Singles Chart in early May 1985. The song remained on the chart for almost six months, and became one of the highest selling singles of the year.

In the UK, “Move Closer” was followed up with “I Like You” and “Chemical Reaction”, both featured remixes by Shep Pettibone. The real gold here is the B side which was written by Jack Robinson and James Bolden who wrote classic disco era tracks for Tina Charles and Gloria Gaynor.

I have had a few requests to post the full 12″ singles of some early posts when I would often cherry pick a particular mix to post. Most of these early posts were before I purchased the Okki Nokki Record Cleaning Machine and I recently upgraded my stylus to Ortofon OM2 Blue so I took the opportunity to do full new rips of a a number of 12″ singles.

All the original posts will have a new tag letting you know when they are updated but most are available right now.

Enjoy the new rips and have a great 80’s music weekend.

After many months of complaints about the service at Rapidshare, they have decided to reward it’s paying customers with the following:

Dear RapidShare Customers
Kindly we would like to inform you that by 15 April 2014 new prices for our services will be applied. Our new pricing plan as of this date is as follows:

The data traffic limitation policy of their own files will be discontinued.
If you have any questions, please do not hesitate to contact us via support@rapidshare.com

Thank you for your understanding.

As I am funding the cost of file hosting and all the other normal associated costs of cleaning and restoring these vinyl masterpieces personally, I will not be paying 49.99 € per month for a service that has been sub-standard at best.

I’m currently looking at other providers such as Rapidgator or Uploaded and will need to transfer all my files to the new host, if any of you have any recommendations for a new provider, please post a message in the comments.

My guess is Rapidshare will not survive much longer with this current business model so better that I move now before its too late.

The WordPress.com stats helper monkeys prepared a 2013 annual report for this blog.

The Louvre Museum has 8.5 million visitors per year. This blog was viewed about 190,000 times in 2013. If it were an exhibit at the Louvre Museum, it would take about 8 days for that many people to see it.

The WordPress.com stats helper monkeys prepared a 2012 annual report for this blog.

19,000 people fit into the new Barclays Center to see Jay-Z perform. This blog was viewed about 110,000 times in 2012. If it were a concert at the Barclays Center, it would take about 6 sold-out performances for that many people to see it.

As many of you may be aware Rapidshare made some major changes to their processes yesterday, limiting daily downloads to 1gb for regular users or 30gb for Rapid Pro users.

As 1gb only represents about 25 downloads a day based on an average file size of 40mb then this is severely limiting to the avid eighties music fans who visit this site daily.

Therefore I have upgraded my account to Rapid Pro which should allow about 750 downloads daily which should cover you all quite nicely. I have taken up this option for 150 days and can review it again when it expires.

If you are still having any difficulty accessing files, please let me know and I can take this up with Rapidshare.

Unfortunately, this means no new post today but normal service will resume in the morning.

As we close in on 100,000 hits for the blog, I thank you all for your continued support and please take the time to throw a comment my way, it really does help keep up morale and the enthusiasm to keep the site going.