Fonda Rae is an American rhythm and blues singer best known for her club hits like “Over Like a Fat Rat” and “Tuch Me”. She also worked with part-time chart-toppers such as Don Armando and Kid Creole and the Coconuts. Rae also collaborated with more mainstream artists such as Taka Boom, The Fat Boys and Debbie Harry.

The single “Tuch Me” was originally released on KN Records in 1984, written, produced and arranged by Carmichael and Adams and mixed by Bruce Forest, it reached #49 on the UK charts and #70 on the US Billboard R&B charts.

The Cathy Dennis cover version in 1991 would do even better on the charts, going to #5 in the UK, #16 in Australia, #2 on the US Billboard Hot 100 and #1 on the US Hot Dance/Club Play charts. For this cover of Patrick and Greg received the 1992 ASCAP Songwriter of the Year Award. 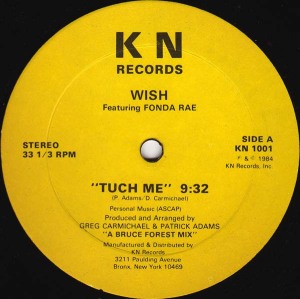